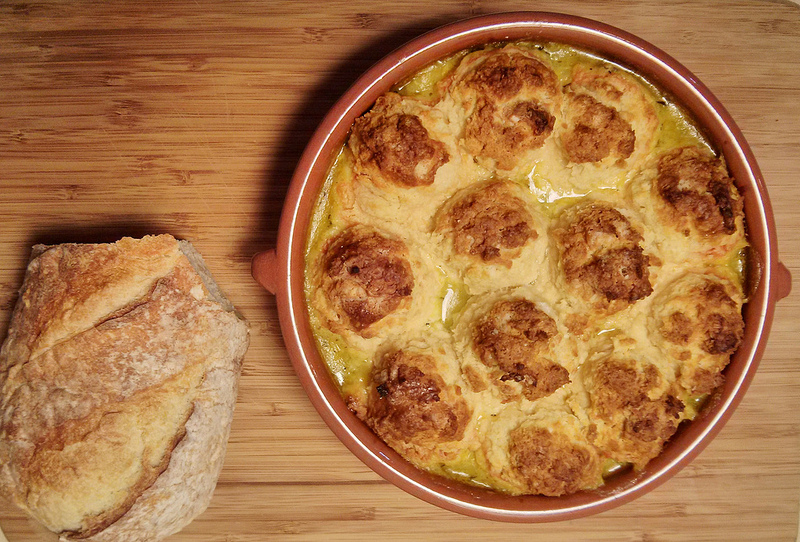 I’ve been thinking a lot about meat pies lately, brought on, no doubt, by my involvement with a recent production of Sweeney Todd. The grislier aspects of that bit of musical theater, aside, it seems I’m not the only one with meat pies on the brain. The March issue of Bon Appetit features Short Rib Pot Pie on the cover, and a recent wedding in Yorkshire was disrupted by a brawl over pork pies.

Truth is, that, like dumplings, every culture has a form of meat pie: Jamaican meat patties, South American empanadas of all stripes, Australian pie floaters (a meat pie overturned in a bowl of pea soup, topped with tomato sauce), South Asian samosas, the French-Canadian tourtière. The only distinction might be how one defines a meat pie: baked in a dish and topped with a pastry crust, or a hand-held patty? Maybe encased in bread dough, as in Kate’s favorite bierocks. And then, just in time for St. Patrick’s Day, there is shepherd’s pie, where the crust is abandoned for creamy mashed potatoes.

No matter. When it comes to meat pies, we’re all pretty much related; recipes from one country to the next overlap to such a degree that it’s a bit like following a trail on Ancestry.com. The Nigerian meat pie, with its dash of curry or cayenne, is reflected in Caribbean meat pies, with their addition of local Scotch bonnet peppers, as well as in the Natchitoches meat pie (an official state food of Louisiana), which swaps in bell pepper.  Kate jazzes up her mom’s traditional chicken pot pie (pictured above) with a hit of turmeric. The influence of the Ottoman Empire is apparent in the phyllo-wrapped meat pies found through the Middle East, Greece, North Africa, and the Balkans.

Thus we land on the Burek, a meat pie common in the former states of Yugoslavia, including my family’s homeland of Croatia. It’s made from a paper-thin flaky dough stuffed with ground meat and spices,  served with a yogurt sauce on the side. This particular recipe encases the pie in phyllo and wraps it all up neatly with a topping of Greek-style yogurt and eggs that bakes into a non-drippy custard with just the right tang to enhance the filling.

Phyllo can sound frightening to work with, but it’s really not difficult at all if you take a little time to gather the right tools to keep the thin sheets of dough from drying out (a damp kitchen towel, some plastic wrap, melted butter or olive oil, and a pastry brush are essential.) Or you can go all out and try making the dough from scratch.  You be the judge.