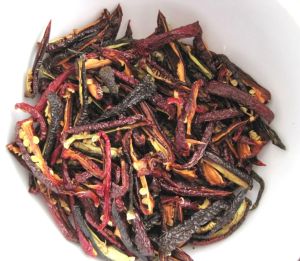 So, earlier this year you picked up one or two of those cute little jalapeño or cayenne plants for your patio or garden?  You thought it would be fun to have a few hot peppers, maybe throw them in chili or make a spicy cornbread. And when the first peppers arrived, you did just that.  But then the peppers kept coming. And coming. Now it’s the end of the season and you’re trying to figure out what in the world to do with all those pounds and pounds of gorgeous peppers.

Drying jalapeño peppers is a great way to lock in the heat and flavor for the coming winter. The internet is rife with conflicting opinions of how, exactly, to go about the drying process. Many people talk about air drying, but that’s always been a miserable failure for me; even hung in a hot, dry location, the peppers get moldy before they get dry. Instead, I turned to my convection oven. After multiple tests, I think I’ve finally got the ideal pepper drying and powdering process.

The first thing to know about jalapeño peppers is that they aren’t green. Sure, you can eat them green, but if you leave them on the bush they will eventually turn bright red. They don’t get any hotter when red but they do develop a much richer flavor. It can take a couple extra weeks, but your patience will be rewarded.

When drying peppers in an oven, it’s best to use a true convection oven, one where all the heat comes from the air being blown, and the upper and lower heating elements remain off. If your oven can’t do this, be sure to preheat and keep the peppers away from the heating elements. Remember, you’re trying to dry them, not roast them.

To prepare the peppers, rinse them, dice them into small pieces, and spread them out on a cookie sheet. Don’t mince them; the goal is to cut them into pieces small enough to allow good air flow for drying. Don’t use a wire basket or any kind of rack with holes; you don’t need it for air flow, and all the seeds will fall out and make a mess. If you want to reduce the heat of the powder, take this opportunity to cut out some (or all) of the seeds and the white part up the middle where most of the capsaicin resides.

At this point I should mention latex gloves.  When I first started, I thought gloves were for wimps and I just powered through. And while it didn’t kill me, several days of burning, tender fingers, lips, and eyes (because you ARE going to rub your eye unconsciously at some point) got old. If you’re handling a lot of peppers, it’s going to get messy. If you do forgo gloves, keep a small dish of warm water and baking soda at hand; dunk your fingers in to neutralize the acids. It’s not perfect, but it helps.

The key to successful oven drying (like anything else in life) is time and temperature. Generally, you need a low temperature over a long time. Too hot and you risk roasting or burning your prize. Temperature will vary depending on the type of pepper, how fleshy it is (jalapeños tend to be fleshy, cayenne not so much), and how long ago they were picked. You want to maintain a temperature that is hot enough to drive out the moisture but cool enough to avoid burning the oils. Turn up the temperature toward the end to give the peppers a nice smoky flavor.

For freshly picked jalapeños, I set the oven at 235 degrees for the main drying period and 250 degrees for the charring at the end. The main drying can take as long as 3 hours (yes, hours) if the peppers are particularly moist. If the peppers start to “puff up” then you’ve got your oven too hot; they will burn before they fully dry out. You’ll know when they are almost dry because they will start to darken (but not burn), turning a brown/grey/black color. Test by taking them out of the oven for a few minutes. They should be completely brittle with no soft spots. At this point, bump up the heat and give them another 10–15 minutes to slightly char them. The charring is essential for flavor.

For thin-skinned peppers such as cayenne and poblano, I use a slightly lower temperature (225 degrees), which allows the flesh to dry without burning. They’ll dry out in about half the time of jalapeños (60–90 minutes). For the charring, I find 235 degrees is enough.

You’ll want to watch your first batch carefully and play around with times and temperatures. Test your peppers every 30 minutes, and stir them around on the sheet so they don’t stick. If your temperature is too low, the drying will take forever. If you go too high, you’ll see the peppers puff up and char as the oils break down. The more water in the pepper, the hotter you can go and the longer you’ll need.

Once your peppers are thoroughly dried and slightly charred, take them out of the oven and let them cool for 15 minutes before working with them. This gives the oils time to cool and harden. You want the peppers to be cool and brittle when you grind them up.  For the grinding, use a ceramic or marble mortar and pestle; wooden ones will absorb the oils and have a hard time with the seeds. Get a good sized one, with a deep bowl. You’ll need it! I find I get the best results using light to medium pressure. Leave some texture in your mix. If you grind too forcefully, you’ll have a less interesting fine powder.

Most of the heat in peppers is carried in the seeds and the white veins. Including more seeds in your mix increases the heat. Grinding up the seeds (as opposed to letting them remain whole) greatly increases the heat. Early on, I made the mistake of thinking that I wanted my powder to be HOT, so I captured all the seeds and powdered them in the mortar and pestle. The result was a powder that was so hot that it overpowered all  the good flavor and was nearly inedible.  Since them, I have learned to moderate my seeds. I strip out any big clumps while chopping, and any that come loose during drying are left out. For the seeds that do make it into the mortar, I don’t try to pulverize them and let most go in whole. The end result is still plenty hot, and you can always add more seeds back in if you’re not satisfied.